In praise of Groundcovers

As a sole gardener with occasional paid help I decided very early that I was not going to be a slave to lawn.  I didn’t want to spend time and energy, or pay someone several times a summer to cut the four lawns on my property.  Lawns can be satisfying but can also be high maintenance. They require much watering which is time consuming especially during the long hot summers where they often turn an unsightly brown. They also need constant weeding and fertilising which very quickly altered my view of the need for lawn.

I subsequently removed all the lawns, covered the area with a good top soil, and then a layer of good mulch while I sought advice re groundcovers. The huge variety of groundcovers is quite amazing.  There are at least two or three for every aspect and I have found that a plant will last if the aspect is correct even if soil type and fertilizing is inefficient.  I lost some time in the initial stages mostly due to incorrect aspect.  I’ve planted as many varieties as possible and have found the natives the most hardy, bird-attracting, low maintenance, and water saving. In some cases they have spread so significantly that I have had to trim them back.  In addition bulbs and other plants will grow between some groundcovers and create colour all year round.

My favourites are the mossy-type mounds often used in Japanese gardens, as they spread very well, love the hot sun and remain green and beautiful all year round.  One such Scleranthus biflorus is particularly satisfying as it maintains its shape, is a beautiful green, and small pieces can be transplanted to encourage a stronger cover.  I am particularly happy with Clematis petriei x marmoraria - a Clematis that is a low growing groundcover. It has masses of white flowers, remains green all year and I have planted mine on a specially built mound so that it cascades and eventually will run along the ground.

There is no end to the versatility of ground covers and I have listed a few and urge the reader to try some.  I don’t always follow the advice on the card especially if recommended to plant in a rockery, because I don’t have one but I do pay attention to aspect, sun tolerance and watering. I can highly recommend groundcovers for the gardener who wants to spend more time with other gardening activities rather than cutting the lawn.

Below I have answered questions posed to me regarding groundcovers. As well, I have listed a range of groundcovers. 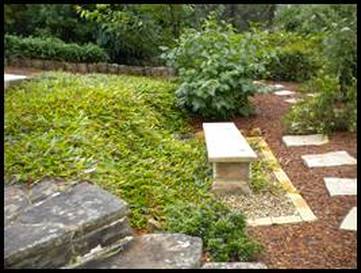 Q.  Did you start planting in one corner of your yard and then let it spread? How did you approach it?

A. My planting was haphazard; I didn’t start in any one specific place especially with the small covers that take time to establish. Initially I wasn’t sure how far the plant would spread, so I gave them space to move, and of course my main concern was aspect suitable to the plant.

Q.  How many plants did you have to buy up front?
How did you get the ground cover to cover a huge area where the lawn was situated?

A.  I bought about half a dozen up front but most of the time it was trial an error making sure I got the aspect correct for the plant. The type of plant governed whether I wanted a large area covered, which way it was going to grow and how much space it would want to take up.

Q.  How long did it take for the ground cover to take over the lawn area you wanted to cover?

A.  It takes time for the ground cover to establish and again how much space did I want to cover??  I have shrubs growing in between the covers so I get an overall cover with both shrubs (azaleas/rhodos etc) and ground covers together. I planted the shrubs first, and then groundcovers.

Q.  Do you know which ones are fast growing and fast spreading?

A.  As with every plant one must be patient to allow it to establish, some covers grow very fast, are hardy, require little maintenance and others are more demanding.  I found the natives the most accommodating. I think the natives are faster growing than the exotics.

Q.  From where did you buy your ground cover plants?

A.  Any nursery will give good advice but you have to have in mind exactly where the cover is going to go so you get the aspect right and I bought them from everywhere but making sure they would grow in the mountains.  I bought only frost tolerant ones.

Q.  Did you have trouble with the old grass coming back?

A.  I had some trouble with the old grass coming back but I absolutely persisted and every time a weed or grass showed up it was pulled out.  I was vigilant but now I have minimal weeding to do.

Q  How did you kill off the old grass before you put down the top soil and mulch?

A. I used a grass and weed killer to kill off the grass and I waited until a month or so before planting covers, but bear in mind we've had a lot of rain over the past four years and this helped enormously with the planting and establishing.  I don't have much trouble with snails, and I don't have to mulch much.